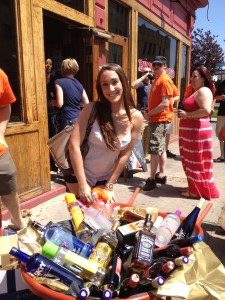 Rochester, NY – May 9, 2012 – Today the organizers of Rochester’s favorite charity drinking event, that raises money for the local Upstate NY Chapter of the Multiple Sclerosis Society, continued to receive inbound contacts from local small businesses wanting to get involved and wondering how they can help to raise money for the cause. 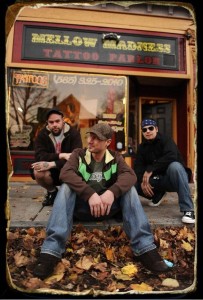 One small business is not your typical “we’re involved in all kinds of chary work” businesses, but reached out with just one question in mind, “someone was talking about this in our shop today and it sounds like a great cause and event, can we help out?”  Benjamin Muscolino, the MSPubCrawl.com volunteer that fielded the questions from the local tattoo shop, Mellow Madness Tattoo Parlor, responded with “we have a very successful raffle, the more we have to give away, the more money we stand to raise, can you donate your services?”.  Chuck “Delux” Nicoli responded with one word, “Done”, followed by, have someone come by and grab the gift certificate whenever it’s convenient.

In a down economy with small and even large businesses struggling all around us, and especially having a business that seems to be one of those nice to have versus must have services, it’s refreshing to see a successful local small business take the initiative and want to get involved in their community and contribute in some, even very small way.  Especially a trade such as this, that is in the theme of what Rochester is known for and has been for decades and decades, Art.  Kudos to the crew over at Mellow Madness Tattoo Parlor, there are certainly some in Rochester’s business district, and probably communities across the country, that could take a lesson in community participation from this fine small business.

Penfield, N.Y. – Feb. 2012 –  The Giunta brothers, Chris Eric, and David, knew they wanted to raise money for the local chapter of the National Multiple Sclerosis Society (NMSS) but wanted to do it in a non-traditional way. 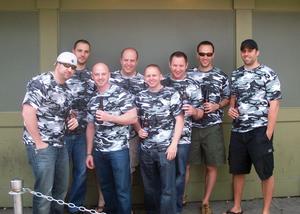 Their mother Sue suffers from MS, so it’s understandably a cause that falls close to home. In 2005, they teamed up with their five friends — brothers Steve, Jim, Mike, and Scott Drechsler, and Jason Cammarata to hold a barbecue at David Giunta’s house in Macedon in 2005, which raised over $300 for the cause. But they wanted to go bigger.

“We didn’t want to be another group asking people to donate to charity,” said David Giunta. “We wanted to do an event that involves something people do anyway for fun.”

So in 2006, they hosted the first Rochester MS Pub Crawl, an annual event that has exploded in popularity, raising a total of $60,000 in six years.

Next month, he and his fellow event organizers will be recognized as a “Group On the Move” by the MS Society after being listed among 10 winners in different categories for outstanding contribution and advocacy. They were nominated for the award by a man who attended the crawl.

This year’s crawl will be held on Saturday, May 12 and will include more than 10 bars along Monroe Avenue in Rochester.

Each year, the organizers say they are amazed by the event’s turnout. For bar owners, it can be a blessing and a curse as lines stretch out the door. During the first three years, Chris Giunta said several owners were frantically calling employees to come into work.

Then the unthinkable happened.

“We drank Woody’s out of beer,” said David Giunta, with a chuckle.

Its success has helped draw a crowd that’s different from other events of its kind, explained brother, Chris.

“You’re sort of appealing to a different deomographic,” he said. “It’s very impressive when you can walk by a bar and see people waiting to get in. It’s a good testament to the cause.”

Fundraiser Asks People to Raise Their Glasses for Charity

Today the MSPubCrawl confirmed the date of their 4th annual event to raise money for the Upstate NY Chapter of the National Multiple Sclerosis Society.  The MSPubCrawl will be on Saturday, April 25th, along one of the main bar strips in Rochester, N.Y.

Rochester, NY (Vocus) April 1, 2009 – Today, the MSPubCrawl confirmed the date of their 4th annual event to raise money for the Upstate NY Chapter of the National Multiple Sclerosis Society. The MSPubCrawl will be on Saturday, April 25th, along one of the main bar strips in Rochester, NY. The event starts at noon at Damian’s Pub, and is open to anyone 21 years or older. From Damian’s people will work their way down Monroe Avenue, visiting participating bars along the way, ten in total. To participate you just need to purchase an MSPubCrawl silicone bracelet – which you can find on mspubcrawl.com for $10 in advance, or at the door on April 25th for $15. In the previous three years attendance has grown from just over 300 people to close to 1000, and the donation tally has exceeded $30,000. The founders of the MSPubCrawl are hoping to exceed 1000 people this year, and raise over $15,000. 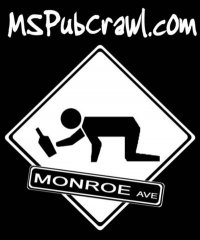 The MSPubCrawl was started by eight friends in 2006 to raise money for their MS Walk team. They formed a partnership with the local Budweiser/Michelob distributor, and worked with the bars in a popular nightlife area to offer drink and food specials to anyone wearing an MSPubCrawl bracelet on the day of the event. Bud Light and Michelob Ultra bottles were sold at every bar for $2, and some bars offered $2 well drinks and $2 specialty shots (specials that have stayed consistent and will be offered again at the 2009 event). They created a buzz through word-of-mouth and grassroots marketing efforts. Bracelets and t-shirts for the event were sold for $10 and the money was donated at the MS Walk the following weekend. A tradition had begun.

“We set out to create a new type of charity event. Not one that you attend because you feel obligated, but one that you actually want to go to. One that you circle on your calendar.” said David Giunta, co-founder of the MSPubCrawl. “The turnout was overwhelming, and it gets better every year. We have people coming in to Rochester that weekend just for this event.” To accommodate them The Strathallan, a local hotel in the heart of the city, has offered rooms that night to the MSPubCrawl attendees at a considerable discount. In fact many local businesses have gotten involved. The 2009 t-shirts were sponsored, and local radio advertising was donated. Giunta added that additional sponsors are always welcome, and that he is available to discuss options with anyone interested.

Getting a hotel in the area involved was just one step the MSPubCrawl took to ensure a safe event. All bars offer free soda to designated drivers, and the phone number to a cab company is handed out on a flyer at the first bar. “Given the nature of the event, we want to be sure that everyone makes it home, or wherever they are going, safely.” reminds Giunta. “It’s also important to keep in mind that it’s not mandatory to drink alcohol at the crawl. Many people come to enjoy the atmosphere, meet new people, enjoy the food specials, and support the cause.”

“We are deeply appreciative of the generosity and support we receive from this innovative group. We admire their creativity and commitment and wish them great success”, said Upstate New York Chapter President and CEO Randal Simonetti.

If you’d like to learn more about the MSPubCrawl or make a donation, you can visit their website athttp://www.mspubcrawl.com ], or e-mail David Giunta at mspubcrawl (at) gmail (dot) com.

About Multiple Sclerosis and The MS Walk
Multiple Sclerosis interrupts the flow of information from the brain to the body and stops people from moving. Every hour in the United States, someone is newly diagnosed with MS, an unpredictable, often disabling disease of the central nervous system. Symptoms range from numbness and tingling to blindness and paralysis. The progress, severity and specific symptoms in any one person cannot yet be predicted, but advances in research and treatment are moving us closer to a world free of MS. Most people with MS are diagnosed between the ages of 20 and 50, with more than twice as many women as men contracting the disease. MS affects more than 400,000 people in the U.S. and 2.5 million worldwide.

The Walk MS is the National MS Society Upstate New York Chapter’s largest fundraising event of the year. The event is anticipated to raise over $1.6 million dollars across the state with 21 different Walk MS locations. Funds raised from the event are used to support research efforts and award-winning programs and services to over 12,000 individuals with MS and their families in Upstate New York.

Navigate to a different page